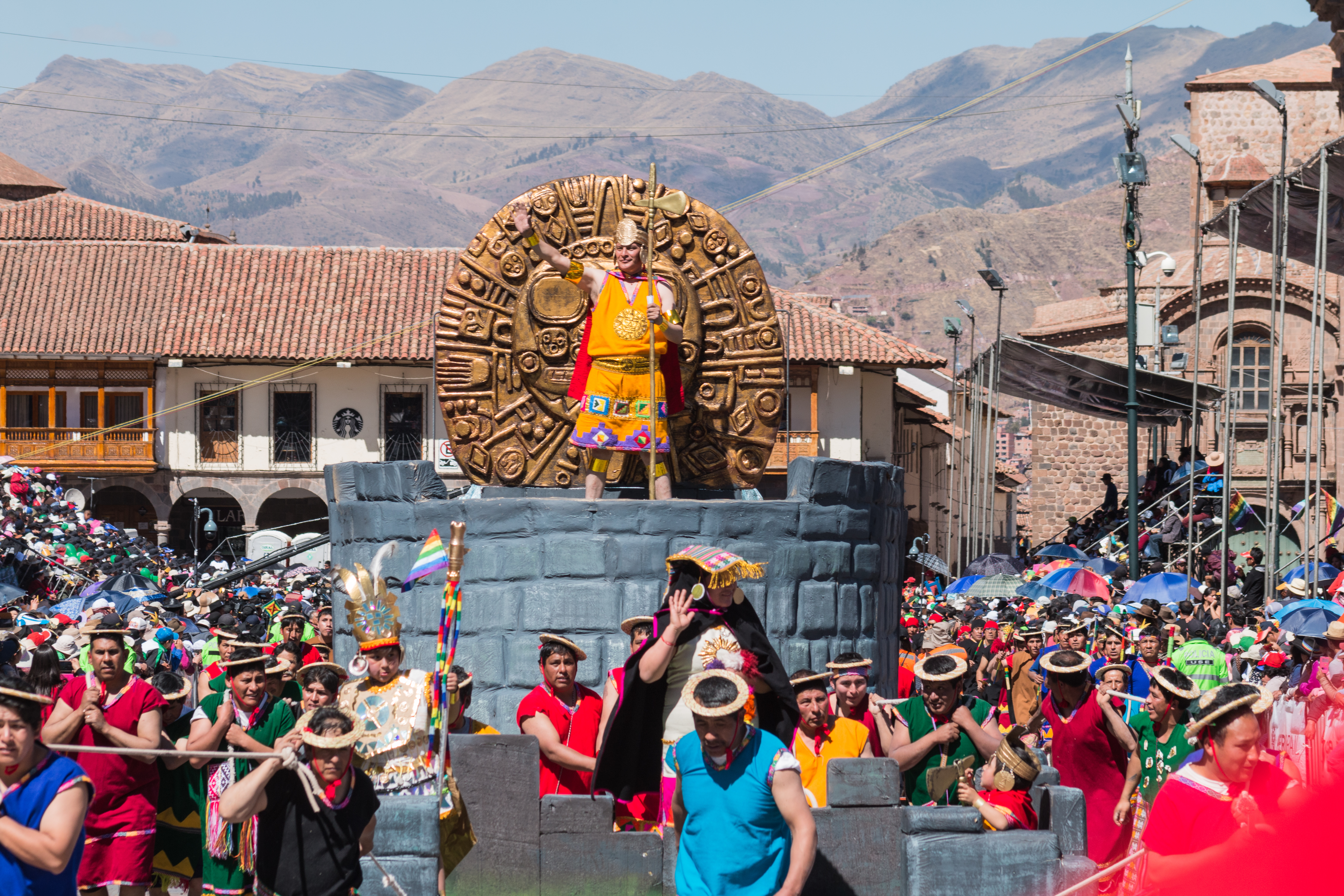 Inti Raymi: what you should know about the Festival of the Sun

In June Cusco is full of colors, typical dances, music and lots of tradition. It is Inti Raymi time, the most famous traditional celebration among the travelers who visit the Imperial city. This 2022, local authorities announced a safe celebration following all the biosafety protocols needed to welcome the visitors from all around the world who want to join the homage to Inti, the god sun.

We are absolutely sure you`ve heard about Inti Raymi a hundred times before, but do you really know what it's about?. Let us guide you through the festivities andean universe and  make your trip to Cusco, even more fantastic than it already is.

What is Inti Raymi?

The Inti Raymi is an Inca celebration that aparece during Inca Pachacutec`s time, as a ceremony of worship to the Sun God, which over time has become one of the most important celebrations in Peru.  This festival is celebrated during the winter solstice when the sun is farthest from the earth in the South American hemisphere and the day lasts less than ever. The solstice also marks the beginning of winter and a new agriculture cycle.

It is said that the Incas paid tributes to the sun so it wouldn't go away completely and would return to illuminate their lands, give them warmth, food and ensure their luck.

Where does Inti Raymi take place?

This celebration paints the streets of Cusco with colors and fills them with traditional dances, typical food and lots of joy.  Local, national and foreign tourists join this spectacle and become a part of the tribute to the most important god of the Inca culture.

The celebrations take place mainly in three points of the city: the Qorikancha Temple, in the Main Plaza or Plaza de Armas and in the Sacsayhuaman Fortress.

In the Qorikancha a staging about the arrival of the delegations of each of four suyos, takes place: Antisuyo, Collasuyo, Chinchaysuyo and Contisuyo, and they all get together to pay homage to Inti. Then they move to the Plaza de Armas, where there is dancing and a lot of movement.

Finally, Sacsayhuaman is the stage for this representation of a ritual of ancient Peru, where the typical costumes and music transport travelers to a time of magic and mysticism, to a land ruled by the children of the Sun. In this staging, the Inca, his Coya and his royal entourage perform a sacred ritual to venerate their god.

How long does the Inti Raymi celebration last?

A long time ago, this celebration lasted almost two weeks. During this amount of time, gifts and presents were given to Inti, such as animal sacrifices and payments to the Pachamama, the andean name for Mother Earth. Today Inti Raymi only celebrates on June 24th, but along the whole month, Cusco is filled with this “special something” that moves around every street of the city  due  the preparations and  dancing rehearsals, which are in almost every plaza of the city.

It's not unusual to come across groups of dancers in the afternoons, evenings or even early on a saturday morning, practicing the dances they will perform on the day of the most important celebration of their beloved Cusco.

With the Spanish conquest, the Inti Raymi celebration  disappears from the customs of the local inhabitants of Cusco, because it is considered by the Catholic church as a pagan celebration and therefore it is definitely forbidden, although in some places far from the city, the communities kept their traditions and passed them quietly and discreetly from generation to generation.  It was in 1944 when a group of thinkers proposed to designate a special day for Cusco and create a unique festivity for it. This is how they decided to celebrate the Day of Cusco every June 24th along with the Inti Raymi, claiming the ancestral customs of the Inca people. 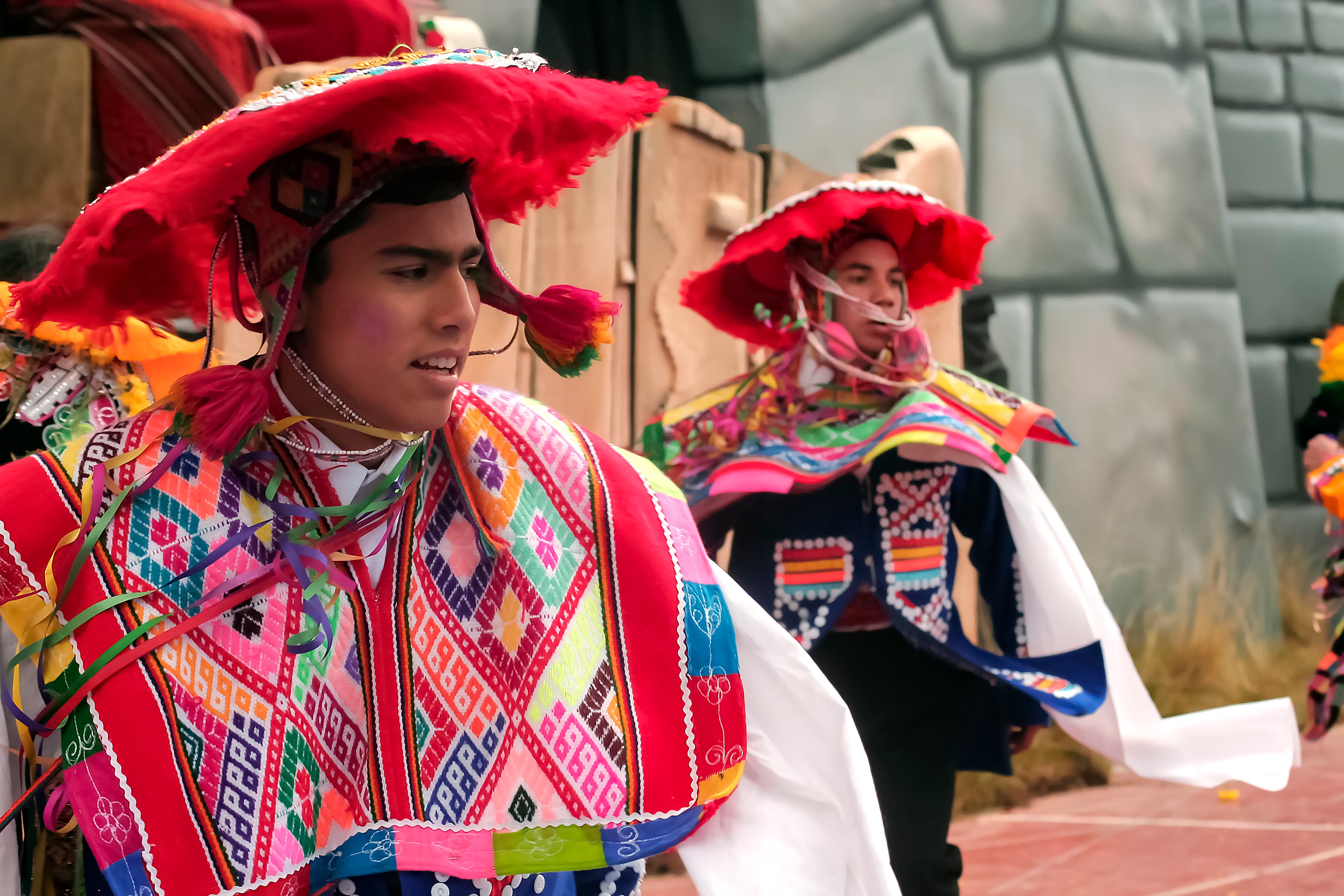 A feast for the senses

As in almost every celebration around the world, during Inti Raymi the streets are filled with sensory stimuli that captivates the hearing, sight, touch, smell and taste. As expected, the traditional food of the land of the Incas is one of the stars during this  celebration. Tamalitos serranos, chicharrones, chica de Jora, frutillada, quinoa punch, breads, huatia and the popular Chiri Uchu fill the streets and markets, inviting visitors into a gastronomic journey that promises to satisfy all tastes.

Chiri Uchu is a typical dish of andean tradition that has its origins in times of the Empire. This is possibly the most representative dish of traditional Cusco cuisine and combines ingredients from different regions of Perù, such as the coast, highlands and jungle.

Chiri Uchu means something like "Cold Chili'' and consists of seaweed, guinea pig, chicken, charqui, potatoes, corn pancakes, cheese and rocotos. This dish can be tasted in the chicherías or picanterías of the city and nearby communities but during the Inti Raymi festival, it can also be found in every street near the Plaza de Armas, Sacsayhuamán or Qorikancha.

Another traditional dish of this festivity is the Huatia, a sort of Pachamanca that contains vegetables, potatoes and other tubers. The Huatia is cooked by heating stones with firewood arranged in a small oven until they are bright red colored, because of the heat. Then the firewood is removed and the ingredients are placed inside. The preparation is covered well and let it cook.

All these delicacies go perfectly  with the traditional drink chicha de jora and people enjoy and dance until the body endures. 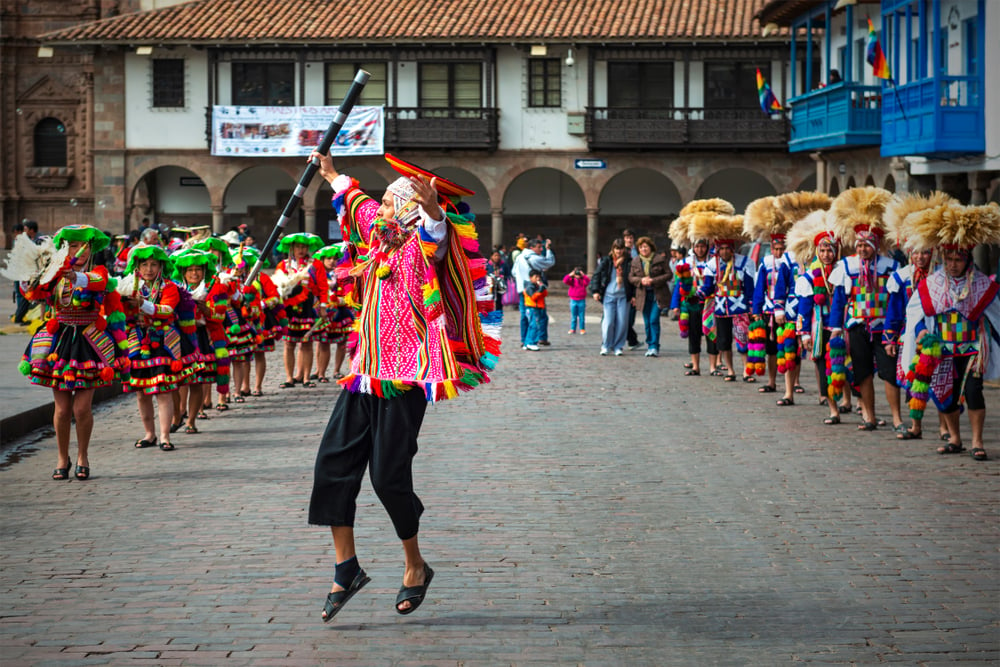 The surroundings of the Plaza de Armas are the stage for beautiful and colorful typical dances representing each of the four suyos, where women and men jump and cheer to the rhythm of a sort of a tap dance called “zapateo” that only local people can perform, due the altitude.

The colorful costumes have elements representative of each dance. The colors identify the dance groups and the communities that participate in this celebration. Each one is even more beautiful and impressive than the other. Undoubtedly, the visitors who are witnesses of this staging cannot help but move to the rhythm of the energetic and joyful Andean melodies.

Just right before the pandemic, in 2020, the Inti Raymi celebrations were being prepared with a deep respect for the environment. The organization intended to create awareness  among the attendees about the unnecessary production of waste. This is why the use of single-use plastics and materials such as technopor, were banned. The printing of graphic material was also significantly reduced and recycled and recyclable materials were chosen for the programs printed in Quechua, Spanish and English.

Inti Raymi 2022 comes back with all the excitement and enthusiasm of a people who wants to share its customs and beliefs with the entire world. The ticket sale to enjoy this wonderful staging of the customs and traditions of the Inca people, started in May. In this recreation, you will see the son of Inti, the great master of the Tahuantinsuyo being carried by his royal entourage, along with his Coya and a group of nobles and warriors as it happened in ancient times.

Come to Cusco for the Inti Raymi celebration and let the colors, sounds and flavors of the andean people with more history, surround you and transport you to the past of a culture that is alive in the hearts of its people and carries its identity in every dance, dish, typical costume and in every single stones of its beautiful and strong buildings.