No matter where in the world, nearly all ancient civilizations have been amazed at the immensity of the sky and its stars. As have other cultural groups from centuries past, the Inca civilization attributed religious virtues to the twinkling points up above.

Their worship of the Sun God (or Inti, the most significant deity) together with the God Wiracocha (or Viracocha, the creator), shows us that it is not possible to separate religion from astronomy when it comes to the Incas.

Pre-Inca civilizations were already studying the movement of Earth and constellations, thanks to their empirical knowledge of mathematics and the movements of the stars.

The coastal civilizations, for example, worshiped the Sun and the Moon, building sanctuaries (huacas) where multiple offerings were made to these stars. Such organization and faith began to constitute what would later become Inca astronomy.

The main objective of the Incas was the unification of the Andean world. Since its economy was based mainly on agriculture, the Inca society needed to have a grasp on the movement of the stars and how the land (and ultimately crops) would be affected. Lucky for them, the Incas had inherited most of this knowledge from their predecessors, the first settlers of Caral (3000 BC).

Aware of the orbit schedules and patterns of the planets, the Incas used mounds (cairns) in the villages to observe these movements and time markers.

Astronomy and religion of the Incas

When it comes to the Inca civilization, it was structured by practical insight amalgamated with magic and religion—as opposed to a deep scientific and mathematical knowledge. As aforementioned, religion was deeply linked to heaven and the star-deities of the Incas.

In fact, huge pathways radiated from the Temple of the Sun in Cusco (Qoriqancha) in various directions, connecting over 300 huacas that had political and religious importance.

Everything we know about the religion and beliefs of the Incas, we know through the chronicles of the Spanish conquerors. In other words, the sources likely tell a skewed version of the complex belief system. In the Andean worldview there was not a single God as in Western creeds.

The Incas believed in the conception of cyclic time (nonlinear), and considered there to be three planes of existence. Therefore, gods, humans and even mountains (such as the Apus) from Hanan Pacha (the upper world), Kay Pacha (the middle world) and Uku Pacha (lower or inner world) often intermingle in one story or myth from Inca culture.

The importance of astronomy for the Incas

Astronomy was incredibly important for the Inca empire as its main economic support, agriculture, so heavily relied on the change of seasons and weather. By carefully observing the Sun, they managed to calculate the solstices and equinoxes. Such natural occurrences were honored with festivals, such as Inti Raymi (June and December) which continues to be celebrated each year.

Throughout the empire, including Machu Picchu, stone structures have been found that are believed to have functioned as solar observatories (termed inti watanas, meaning “where the sun is tied”). 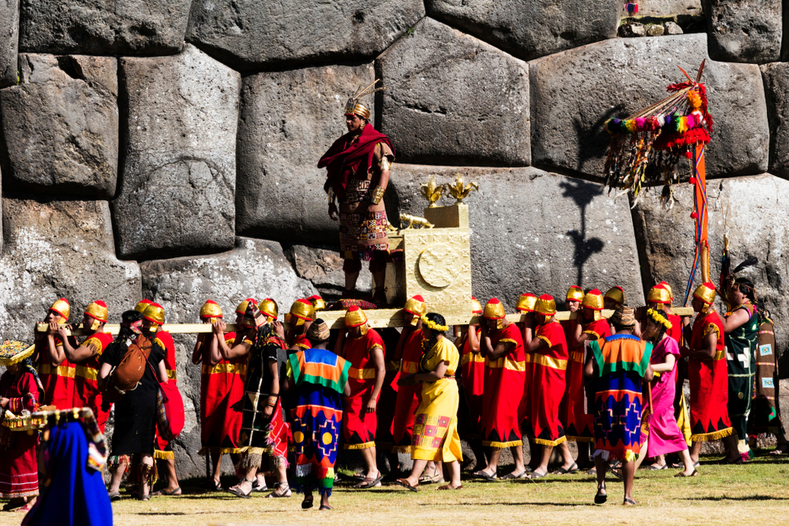 Animal constellations discovered by the Incas

The Incas managed to identify two types of constellations in the Hanan Pacha (the sky or upper world): the light and dark. The first was made up of stars that, when joined together, formed figures in the sky.

The second type of constellation, dark, was related to the gas and dust condensed in the Milky Way in which the Incas identified dark spots (what they thought were carbon spots). It is in the latter that the Incas found constellations of animals.

For the Incas, forms such as the “celestial flames,” the Partridge (Lluthu), the Toad (Hampatu), the Serpent (Machacuay), the Fox (Atoq) and the Southern Cross (Chakana) appeared during the rainy season.

Interested to learn more about the Inca empire, their beliefs and great knowledge regarding astronomy? Travel to the Sacred Valley of the Incas and book your train ride here to visit Machu Picchu, one of the most sacred places of ancient Peru.